Whenever you’re using a flammable object such as sparklers, there is always a certain amount of danger involved. However, if you opt for LED bottle sparklers instead, the danger quickly drops to nearly zero. However, there are still some very important safety considerations to be aware of ahead of time. Below, I’ll discuss the 7 LED bottle sparkler safety tips that all people should know before they enjoy their items. Here’s what you need to know.

Fortunately, since there isn’t any fire involved, our LED wands are by far the safest choice. Whether you plan to use them for bottle service or at home, they are safe for any scenario. However, starting a fire or being burnt aren’t the only possible ramifications of their use. Without further ado, here are my top 7 safety tips.

Batteries Can Be Dangerous

Batteries are not dangerous most of the time, but there are certain situations where they can create problems. First off, you never want to put a battery in your mouth. This can lead to a small shock, or worse; you may end up swallowing it! Additionally, batteries can go bad over time and start leaking battery acid. It is highly corrosive, and will quickly eat through the plastic casing of your LED bottle sparklers. Lastly, you should never attempt to burn batteries in a fire. If for whatever reason one starts to overheat drastically, it can rupture or even explode. Overall, encouraging common sense while handling batteries is always my top safety tip.

It’s Hard to See in the Dark

Just like using regular bottle sparklers, most people prefer to use them in the dark. The light from the LEDs will show up much better when there aren’t other light sources. However, the dark also lends itself to other safety hazards that aren’t a concern in the daytime. For instance, you can easily trip over an object because you didn’t see it and cause an injury. Make sure you clean up any obstacles ahead of time so you don’t have any mishaps during their use.

Pay Attention to What You’re Doing

Similarly, many people get distracted by what they’re holding in their hand. Since they are such an exciting item, people often forget to look where they are stepping regardless if it’s day or night. One of the most practical LED bottle sparkler safety tips I can give is to keep your awareness levels high. Safety is always the priority, so don’t get so caught up in the fun that you make a silly mistake.

Don’t Put Them in a Beverage 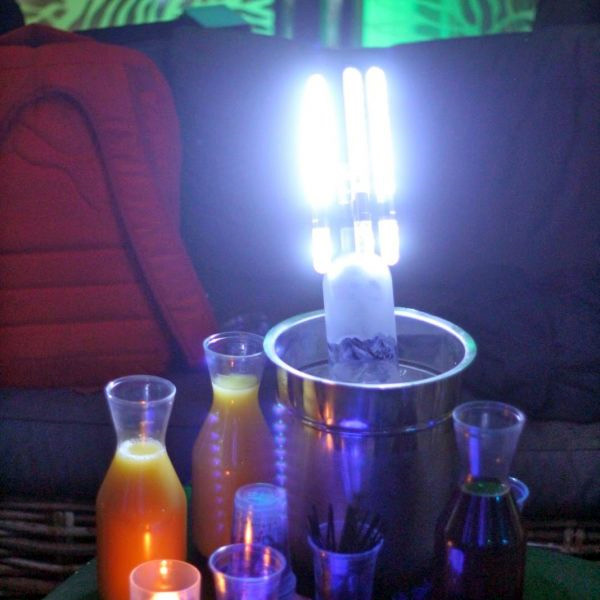 Traditional versions of bottle sparklers have many limitations compared to battery-powered versions. However, one area that they’re superior is when you’re garnishing a cocktail. Regular versions can be placed in the glass for a cool effect while LED versions should never be placed into a liquid. At a minimum, they will short out and quickly become a useless stick of plastic. The worst case scenario is that someone ends up getting shocked or starting a small fire. In the interests of good LED bottle sparklers safety, keep them away from anything liquid. And, if you’re using them for bottle service, make sure to use a sparkler safety clip to attach them properly.

Amazingly, I hear about this problem more than most of the other safety tips I’m discussing. It can be very tempting to use these wands as a “sword” for an elaborate fight scene. Many people note the similarity to a lightsaber, so it’s easy see the temptation. However, they are made from hard plastic and can easily leave bruises and other injuries if you hit someone hard enough. Make sure to forbid sword fighting with your LED sparklers; especially if children will be involved in the celebration.

Risk of Being Burned

Unlike versions that actively create high temperatures, LED bottle sparklers don’t present the same risk for burns. However, as I mentioned, people can be clumsy and trip over things in the dark. If you have anything like a campfire, candles, or lanterns nearby, their use can indirectly cause burns. Additionally, if the batteries rupture from age or heat, the leaking battery acid can cause a nasty chemical burn that could be worse than burns from heat. Though it’s unlikely, always respect the fact that injuries can happen if you don’t follow all of our LED bottle sparkler safety tips.

Lastly, you need to make sure you are storing your items properly in-between uses. I’ve discussed proper bottle sparkler storage in an earlier post, and the same guidelines should be followed for LED versions. Moisture, heat, and time can all lead to problems with your LED items. However, the biggest concern is always the batteries. Make sure you check on your sparklers every few months and inspect them for corrosion. Additionally, consider removing the batteries if you won’t be using them for quite awhile. It’s never fun to have to buy a whole new pack of batteries. However, it definitely beats dealing with the mess and expensive of them rupturing in storage.

Like everything in life, there is no such thing as something that’s 100% safe. Even walking out of your house, you could be hit in the head by a falling piece of space debris. In the end, the best we can all do is to create the safest environment possible. Fortunately, this product already gives you the edge over traditional combustible versions. However, if you adhere to all of my LED bottle sparkler safety tips, you can virtually guarantee that it will be just clean, safe, fun. Good luck and I hope you enjoy the show!

About the Author: Sparkler City

Sparkler City is committed to providing the highest quality items in the industry. Our goal is to help bar and nightclub owners increase their profits by driving more bottle service package sales. Adding bottle sparklers to your presentation will allow you to sell more packages at a minimal financial investment. It's possible to see a sales spike of up to 30% if all of the conditions are right. Every VIP likes to be the center of attention, and our products will do that very thing.